Why ‘Crazy Rich Asians’ Is This Generation’s ‘The Great Gatsby’

[Step aside, Jay and Daisy.]

After discussing how Crazy Rich Asians has been compared to Jane Austen’s novel, Pride and Prejudice, Natalie Sonier, a student at Wake Forest University, argues that the film is better understood compared to F. Scott Fitzgerald’s novel, The Great Gatsby [set up this way, this article gestures toward the “bait and switch” argument strategy from the “Kinds of Arguments” handout.

The excerpt below is where Sonier starts the switch! You can read the full article by clicking the link above.

“Nick Young, on the other hand, is the life of every party and everyone’s favorite guest, but he does not let his popularity go to his head. Instead, he chooses to hide his immense wealth from Rachel, never wanting her to think it defines him as fundamentally different.

In this way, rather than resembling the “Pride and Prejudice” narrative, “Crazy Rich Asians” actually draws closer parallels to “The Great Gatsby.” For instance, Nick’s character mirrors that of Jay Gatsby, as both men go out of their way to please their loves, although they so in two extremely different ways – Young keeps his family fortune a secret, while Gatsby opts to throw the most lavish parties possible to attract his beloved Daisy.

Here are a few other reasons why “Crazy Rich Asians” must be the next “The Great Gatsby.”

Nick perfectly fits the description of tall, dark and handsome. But what’s more, his character is hardly the most attractive of those others in Kwan’s novel. Between cousin Astrid’s exotic features and Araminta Lee’s supermodel legs, Rachel sees greater perfection in every direction.

Of course, the most beautiful people must be dressed in the most beautiful clothing, and therefore, Kwan adorns his characters in carefully detailed custom-made couture from around the world. Delicate fabrics contrast the glare of extravagant jewels the women in the novel shower themselves in, and at least one person asks about the designer of someone’s ensemble at every gathering, practically every few pages of the novel.

But, this material obsession offers a sort of comic relief in situations where the familial tension can be felt by readers. Even if Kwan’s style of subtle mockery and sarcasm aimed at these crazy rich families isn’t your go-to idea of comedy, you’re bound to get a laugh out of the price-tag Kwan puts on some of those designer dresses.”

What Represents Your 21st Century Great Gatsby? And Why?

In place of a final written assignment, you are invited to create an alternative genre, multimedia, or multimodal project that synthesizes what you have learned about argument writing in Expository Writing to represent your 21st Century Great Gatsby.

In other words, you will design + present a project that translates what you have learned about drafting & revising written arguments into a genre/format that is NOT a written argument. Writing is involved in other ways (in the script of a presentation—which explains how your project illustrates + supports the argument you design using images-colors-size-images-sound-video-words +/or other components that are not words.

The Final Argument Project has 2 Parts

1. Final Project: A dramatic or poetic performance, a sculpture, a visual, or audio-visual object that proposes & supports an argument to support Your 21st Century Great Gatsby. Presentations should relate-refer to-riff on course texts/themes (topics, focus, arguments, keyterms, quotations), and/or draw upon papers you wrote in Units 1-2. Your project can be a multimodal or alternative genre/format/version of the argument from your Research Paper.

You must be familiar with + have a solid understanding of the genre or format you choose to represent the argument in your Final Project. So, do not write a soliloquy if you don’t know the formal conventions of this genre of poetry (i.e. blank verse, unrhymed iambic pentameter). Do not write and perform a Rap if you can’t sing, lack rhythm, or can’t alliteratively string words together in complexly meaningful, metaphorically, multiply significant ways. Don’t draw something if you can’t draw.

*OPTIONAL: you can submit a “mock-up,” sketch, or draft—to Canvas if you would like feedback before you present your project in class on May 4th.

The Final Project + Presentation is worth the same as the Unit 1 Writing Assignment and will count as 10% of your final grade.

There is an option for writing PRELIM : Evolving Annotated Bibliography as a Blog Post, earning both PRELIM credit + Blog Post credit. Students who have already completed 10 blog posts will be eligible for extra credit.

First, sign in to your WordPress website (or other blog hosting program).
Second, choose “Posts” or “Add New” from the left menu of the Dashboard.

How to Write Your Topic up as a Movie Pitch or Trailer:

* Be Brief + Detailed + Specific + Concise [1-2 minutes]
* Include significant information w/succinct language + Keyterms
* Set a Tone appropriate for the Topic!
* Incorporate Important Research Keyterms
* Write for a possible Audience . . . to Persuade them
* Use questioning or other hook strategies to draw an Audience in . . .
* Imply Motive (why is the topic/potential argument important?)
* Evoke Stance (To what extent am I invested in this topic+ why?
* Exhibit credible ethos, but be interesting, provocative, controversial
* An Audience should want to read the essay after hearing the Pitch!
* Note the Conversation(s) you are entering
* Gesture to a specific Thesis argument or possible arguments
* Don’t give it away! (No Argument Plot Summaries or Spoilers!)

You will present their Research Topic as a Movie Pitch or Movie Trailer in class on Monday, April 11th!

If you want to sound like Movie Man Voice! 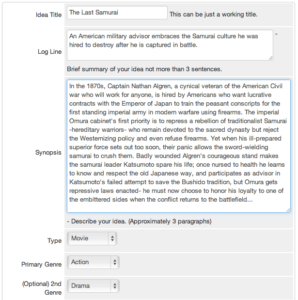 Space, the final frontier
These are the voyages of the Starship Enterprise
Its five year mission
To explore strange new worlds
To seek out new life
And new civilizations
To boldly go where no man has gone before

His Life, His Way (Frank Sinatra as American Gangster)

Analyzing Memes of The Great Gatsby

A Reading of the Tragedy of The Great Gatsby

Flapper or Flop: A Blog About the Triumphs and Trials of The Great Gatsby

Life In A Gatsby Mansion

Once Again To F. Scott

The Fresh Prince of West Egg

The Great Gatsby: Thoughts and Beliefs

The History and Culture Behind Gatsby

The History of the Roaring 20s

The West Egg Perspective: of the American Dream

What’s In The Great Gatsby?